This Forum has been closed to new ideas. You can still vote and comment!

The development of the City's budget for the 2014/15 fiscal year will kick-off in January in order to allow for early community input. We’d like to hear from the community what the highest priorities and main considerations should be in developing the spending plan for the year starting on July 1, 2014.

The City’s current year budget is just over $127.5 million. Nearly $59 million of the total budget is the City’s General Fund which provides for public safety, parks and recreation, public works operations, and other important services. General Fund expenditures are allocated as illustrated in the attachment.

The majority of the balance of the total budget is slated for capital improvements of nearly $27 million including carry-over projects from prior years, debt service, or restricted for services like water operations or transportation.

The City expects to see continued improvement in our main revenue streams as we slowly emerge from the impacts of the Great Recession. While revenues are anticipated to exceed increasing costs, there are many competing priorities in our community.

You are invited to share your ideas as the budget for 2014/15 is in its initial development phase. 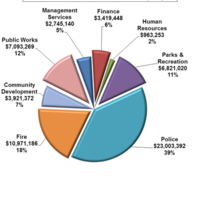 On Tuesday, January 21st at 6:00 PM, or shortly thereafter, the City Council will be taking early input on community priorities and considerations regarding the 2014/15 budget. This item on the regular Council agenda for that evening will kick-off the development of the budget. The meeting will take place in the City Council Chambers at 1400 Highland Avenue.

Idea: The City should invest in maintaining and/or upgrading its infrastructure (water and sewer).

Leilani Emnace admin over 7 years ago

When infrastructure is not proactively maintained, reactive maintenance is often more costly.